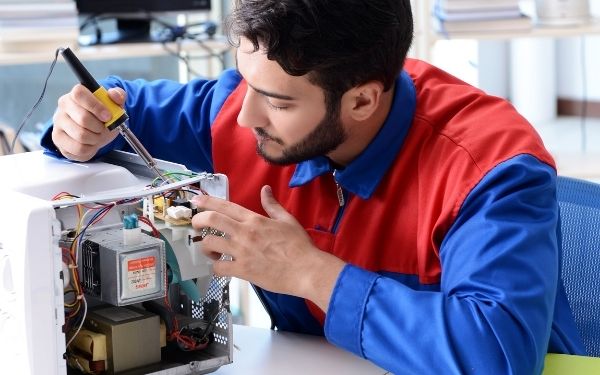 At the very heart and soul of a microwave is something called a magnetron. It’s the driving force that allows it to do what it does. Think of it as the heart of the machine that keeps it alive.

But how does something such as a magnetron work?

In this article, we will offer everything there is to know and answer any questions you may have about a microwave’s magnetron.

What does a microwave magnetron do?

When you put food in a microwave oven and hit the start button, microwaves are created by the magnetron. The magnetron is a tube with a special type of vacuum inside it. There are two metal plates on either end of the magnetron, and when electricity passes through them, it creates microwaves. These microwaves cause the water molecules in food to vibrate quickly, which creates heat. This heat cooks the food.

What is a magnetron?

A magnetron is a device that creates high-frequency alternating electromagnetic fields. It does this by using the principle of resonance to heat up metal particles in a heated gas. This then causes them to emit microwaves. Magnetrons can be used to amplify signals from transmitters or radars and are often found in microwave ovens.

A magnetron is a device that emits an electromagnetic field. This field creates heat or light, depending on the application. Magnetrons are commonly used in microwaves but can also be found in radar and security systems.

Microwave magnetrons are found in microwave ovens and work by exciting solid particles in a gas. This is done by creating an alternating electric field in a resonant cavity that is surrounded by a magnetic field. The current will flow back and forth, heating up the particles until they are incandescent.

How does a magnetron work?

A microwave oven works by using an electronic amplifier to create high-voltage, high-frequency AC electricity. This electricity is then sent through a transformer, which changes the voltage from high to low and increases the current. The transformer also shapes the electrical wave into a sine wave. The shaped electrical wave is then sent to the magnetron, which converts it into microwaves.

The filament is a thin wire that heats up and emits electrons. These electrons are then drawn into the magnetron by the magnetic field, where they collide with the atoms of gas in the tube. This collision creates microwaves. The frequency of these microwaves can be controlled by changing the voltage on the filament.

A magnetron is a type of vacuum tube that uses a high voltage to generate microwaves. In order to do so, it must be supplied with power at 2.5 to 15 volts. If it overheats, its lifetime could be compromised, so it’s important to make sure that the magnetron is properly cooled.

The high-tension supply is the component in a particle accelerator that provides the energy for the acceleration of electrons. This supply is usually kept at a very high voltage so that it can provide enough power to accelerate the particles.

The high tension supply is always a DC power source and can range from 2 kV to 15 kV with a current ranging from 100 mA to many more A. This voltage is necessary to generate the high-powered electron beams that are essential for the magnetron’s operation.

What causes a microwave magnetron to fail?

There are a number of things that can cause a microwave magnetron to fail, but the most common is reflected microwave energy. When microwaves bounce off the oven walls and hit the magnetron, it can cause it to overheat. This is often due to damage to the antenna cap or dome, which can happen if there’s an arc-over event.

Another common cause of failure is when terminals burn out. The insulator in the magnetron helps protect it from direct voltage, but if it’s damaged, it leads to a breakdown and the burning out of the terminal. Loose connections can also lead to high resistance heat, which is what happens with most failures.

The antenna and dome should not be reflective because they will get burned or damaged by reflected microwaves. If they are reflective, then they need to be protected by either the antenna cap or dome.

The heat of the magnetron that starts in the oven eventually burns out other parts nearby, resulting in black spots and burn marks on the damaged area.

Finally, resistance continuity is a test used to check between wires with an ohmmeter.

What happens when a microwave magnetron fails?

If a magnetron is failing, you might start to see some signs.

For example, the microwave might stop heating food or make snapping sounds before dying altogether.

Additionally, you may smell arcing or burning smells while cooking food in the microwave oven. So, it’s important to know what these symptoms mean and what to do if they occur.

The best way to avoid damage caused by a failing magnetron is through periodic maintenance. This means checking on and cleaning the main components of the microwave on a regular basis. By doing this, you can help prevent serious problems down the road and keep your microwave running smoothly for years to come.

How to repair or replace a magnetron

Microwave magnetrons can be repaired, but it is often more cost-effective to simply replace them. If you do indeed decide to go with the repair route, we have outlined the steps to repair one on your own.

If you have checked all of these things and the magnetron still isn’t working, it is likely that the magnetron itself is damaged and will need to be replaced.

First, you will need to purchase a replacement magnetron. Make sure you get the correct model for your microwave. Next, remove the old magnetron by unscrewing it from the mounting bracket. Be careful not to drop it or damage any of the connections. Once the old magnetron is removed, install the new one in its place and screw it into the mounting bracket. Finally, reconnect any wires or cables that may have been disconnected during the process.

When to replace your microwave?

Is it worth it to replace a microwave magnetron?

Magnetrons are typically warrantied for about 800 hours of use, so if your magnetron is failing sooner than that, you may have a lemon on your hands. If this is the case, you should contact the manufacturer to see if they will replace the magnetron free of charge.

When shopping for a new microwave, you may want to look for one with a longer warranty on the magnetron. This way, if the magnetron does fail, you will be covered.

A new magnetron can cost anywhere from $30 to $200, depending on the make and model. Magnetrons are the key components in a microwave oven, so if yours is starting to fail, it may be time to replace it. Fortunately, they’re relatively easy to find and install.

New microwaves can cost anywhere from $50 to $500. The price will depend on the brand, size, and features of the microwave. Some factors that can affect the price include whether it is a countertop or built-in model, the wattage and whether it has special features like a convection oven or sensor cooking.

Other real-world uses for magnetrons

Magnetrons are not just found in microwave ovens! They have a host of other real-world applications. For example, they can be found in medical devices and airport security scanners.

Medical devices use magnetrons to generate heat or electromagnetic radiation that is used to treat cancer or other medical conditions. The high power and precision of the magnetron allow for safe and effective treatment.

Airport security scanners use magnetrons to create images of passengers’ bodies. The scanner sends a low-power beam of radiation at the passenger, and the magnetron then creates an image based on the reflections from this beam. This image is used to check for hidden objects or weapons.

How dangerous is a microwave magnetron?

How powerful is a microwave magnetron?

Can you recycle a microwave magnetron?

However, if you must, you can recycle a magnetron on your own by following these steps: